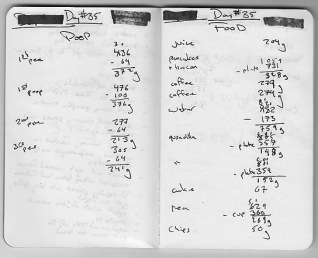 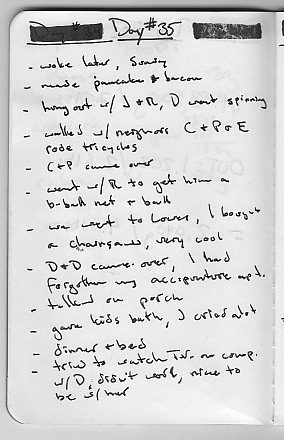 “In the creation of Pocock’s newest project, he became the subject in an intimate experiment intended to determine and better understand the energy produced by our bodies from the food we consume each day. Over the course of 63 days, Pocock meticulously weighed all the food and drink he consumed as well as all the waste and urine he eliminated. Determining these weights and then calculating the differences between them would represent an approximate measurement of each day’s energy production. In addition to recording each day’s statistics in a series of notebooks, Pocock also kept a daily diary of his interactions, activities, and thoughts about the project. Pocock’s diary entries comment on the importance of the sun for all sources of energy, the role of fossil fuel usage in his daily life, and his body’s continuous cycle of energy transfer. As he writes in one entry, “I am the expression of my food,” while in another he asks, “where does the energy go after it leaves my body?” This exhibition poses these and other questions about man’s sources and uses of energy every day. Pocock’s new installation documents his 63-day experiment in several parts. The daily activity of the project is articulated on the gallery walls through the pages of his daily diary entries, while a series of wooden blocks give dramatic form to Pocock’s final data—the resulting energy calculation after 63 days of food and 63 days of waste. Several of the blocks represent the weight of Pocock’s final food intake of 511 lb 8 oz, others represent his waste measurement of 255 lb 4 oz, while the final block represents the total energy calculation of 253 lb 5 oz.”